Typically, when a car manufacturer lends out a test-drive unit, they’d make sure it’s spec’d either as a top-, or at the very least, a mid-trim variant. With plenty of bells and whistles, it can easily distract the casual journalist from tiny flaws which would be more evident if it were bare. With that, it was ballsy for MG to send over this—the MG 5 Core M/T—the entry-level variant of its most affordable car in the market. At P658,888, can this fleet-friendly sedan pass muster?

Things certainly start on the right note. Despite the “entry-level variant” moniker, it doesn’t look bare. Sure, it rides on steelies that are an inch too small, but aside from that, it passes the driveway test. The Laser Blue color does help, but majority of the MG 5’s head-turning trait is down to that front end. Compared to most other subcompact sedans out there, the formal face with that large grille and squarish headlights is a sign that you should take this car seriously; ditto with the back end as well.

Climbing aboard, it’s nice to see the MG 5 take on a more grown-up approach. The layout itself is clean, chic, and easy around to navigate. The all-black scheme is broken up by pieces of textured aluminum-like trim as well as a leather-like topper with white stitching. The chunky steering wheel is covered in leather—a rarity in this price range, while the stalks and switches all feel solid. Settling in to a comfortable driving position is easy despite the seat’s limited four-way movement and a steering column that only adjusts for tilt. All’s said and done, this has one of the nicest cabins in its class. 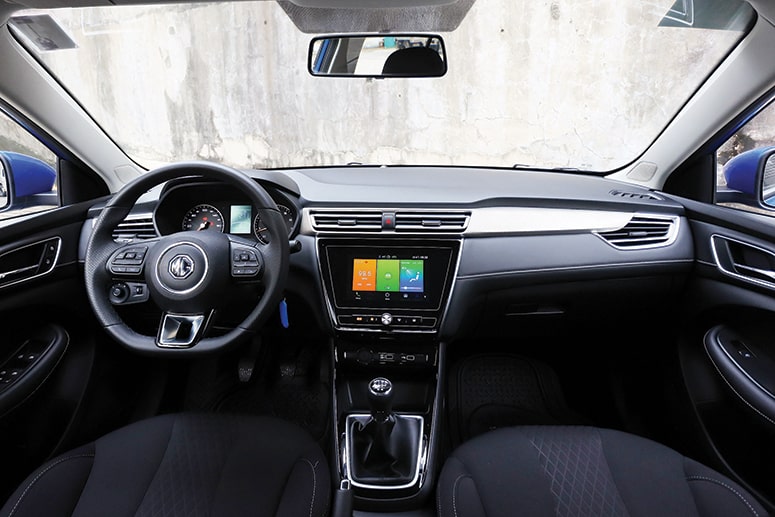 Things would have been perfect if not for MG’s decision to chuck sound ergonomics in favor of keeping the minimalist aesthetics. Take a gander at the cabin, and you’ll notice that your attention is fixated on the large eight-inch screen. Look below it. See those four buttons with a small knob at the center? That controls the entire aircon system. Operating it can be an exercise in frustration. Turning it on and off is simple enough, that’s the leftmost button. Need the defogger? Those are the buttons to the right of the knob. Need to change any other setting like fan speed or temperature? That’s a combination of the second-to-the-left button and the knob. It’s even more confusing when that center knob also controls the stereo’s volume.

Marketed for its class-above size, the MG 5 doesn’t disappoint in that regard. There’s plenty of head- and legroom front or back. Interior storage space is ample with a lidded center arm rest, and an open bin in front of the shifter. However, because the USB plug for the smartphone is located there as well, consideration must be done to ensure the cables don’t get entangled with the shifter. Pop the trunk, and the available space there is huge. Be careful with the trunk lid though; its small angle of opening can, and will, cause you to bump your head on it from time to time. 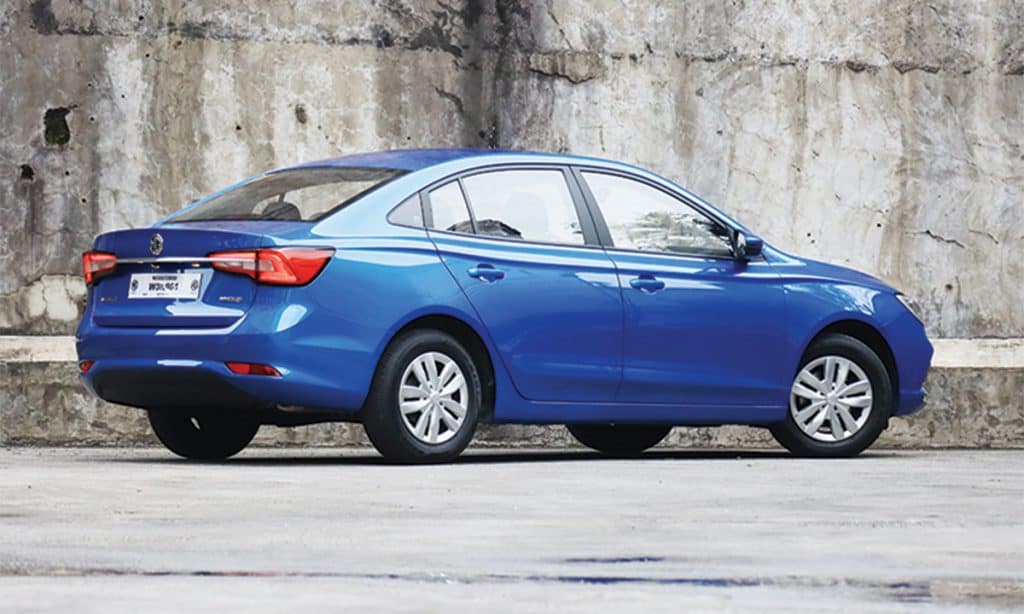 Twist the key (yup, there are no push-button starts on this car), and the 1.5-liter engine comes to life. It’s the same one that powers the MG ZS so outputs are the same: 114hp and 150Nm of torque. However, because the MG 5 has a sizable weight advantage—some 73 kgs lighter, it makes a difference on the road. Apart from being good off the line, it hums comfortably along. The five-speed manual, with its light clutch and short throws, is tuned to keep engine revs as low as possible, so continuous rowing may be required on a daily basis. That said, fuel economy is impressive: 10.6 km/L at 16 km/h.

Just like its engine, the rest of the MG 5 package is meant for the daily grind. The body itself shows a bit of lean, and it never feels particularly agile. However, it does perfectly fit the bill for those seeking a cushy daily driver. The light steering effort means it’s easy to maneuver it through tight confines, while the softly sprung suspension smoothens out most road imperfections. It can get caught out by expansion joints and other sudden shocks, mind you.

After all’s said and done, you will never be able to talk about the MG 5 without mentioning its price. For P658,888, it certainly presses all the right buttons, especially for those looking for a value-for-money daily commuter. While the Style and Alpha variants do offer a lot more toys, they all range from P848,888 to P938,888. This entry-level Core doesn’t just deliver on its promise to be a good starter car, it also manages to overturn the subcompact order. It makes every other choice out there seem overpriced or underspec’d by comparison.

The Land Transportation Office (LTO) has summoned the woman in a viral clip for not wearing a helmet while on board a...
Read more
Wheels Deals

Find ‘LOVE’ with Hyundai this Season of Hearts

February, known as the month of love, can bring out the joy (or stress!) among the hopeless romantics who desire to give their significant...
Read more
Wheels Deals

Discover Subaru’s commitment to total safety by driving one today

Motor Image Pilipinas, Inc. (MIP), the exclusive distributor of Subaru vehicles in the Philippines, has been keeping families safe before, now and...
Read more