What to expect from the 2021 Isuzu D-Max

To say that the next-generation Isuzu D-Max has been a long time coming is an understatement. The current generation of the pickup truck has been in our country since 2013. The time the D-Max was launched here, Janet Napoles was facing the Senate for the billion-peso pork barrel scam, but I digress.

Isuzu Philippines isn’t making us wait any longer, though. The Japanese company has confirmed last year that the fourth-generation pickup truck is coming this year, and now we have a date.

Mark your calendars as Isuzu is debuting the next D-Max on March 4, based on the teasers that the company has put out since last week. While that could bring out the excitement for the popular truck, what can we really expect from it? We only need to turn our sights to Thailand for us to find out.

Launched in Thailand in October 2019, the all-new D-Max is bigger in almost every dimension. It measures 5,265mm long, 1,870mm wide, and 1,785mm tall. It’s a little shorter in overall length compared to the outgoing D-Max, but it’s wider and taller. 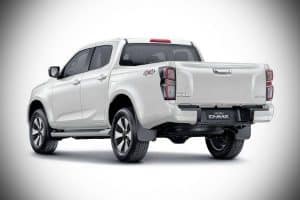 Beyond the size increase, the most notable difference is the update in styling. With a bigger grille, sharper LEDs, and a more robust stance, expect the upcoming D-Max to have a bolder presence on the road. There will most likely be two appearance types, as well – one riddled with chrome, while the other donning a blacked-out grille and other parts for a sportier appeal.

If we’re going to take what Isuzu has done with the D-Max in Thailand (and since we import the truck from there), you can expect the local version to have a plush cabin – at least plusher than its predecessor.

The layout is still utilitarian since there’s only so much you can do to a pickup, but Isuzu said that there’s a healthy dose of soft-touch materials added to the cabin.

Even better, Isuzu has added Apple CarPlay and Android Auto connectivity systems. Although the local version is yet to be confirmed with these features, we’re confident in seeing them here.

What we aren’t sure, however, is if the set of active driving aids like Adaptive Cruise Control will find their way here, along with Lane Departure Warning System, Lane Departure Prevention, Lane Keep Assist, and Emergency Lane Keeping.

Whether you look at the smaller 1.9-liter RZ43 engine or the bigger 3.0-liter, expect a more powerful D-Max to arrive in the Philippines soon. 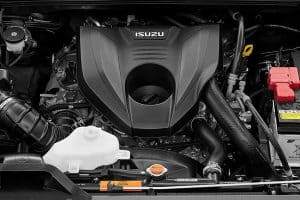 Six-speed manual or six-speed automatic transmission options will make their way on the new model, while 4×2 and 4×4 variants are as sure as the sunset.

While the outgoing D-Max was developed in conjunction with GM, thus sharing platform with the Colorado, the upcoming all-new version has been developed in marriage with Mazda and its BT-50.

Most of the adoption was done by Mazda, though, but it won’t be a tall order to expect some plushness in the D-Max coming from the shared development with the niche automaker.

And oh, the Mazda BT-50 is also set to arrive here this 2021, so expect that to be a D-Max dressed in Kodo design.

The Isuzu D-Max is one of the more affordable pickup truck choices in the Philippines, which starts at below P1-million to around P1.8-million. While it’s hard to throw numbers around here, given that we don’t have that information yet, you can expect a bit of a price increase in the next-generation model. You can charge that to the better materials used in the Isuzu pickup, along with the added technology.

Then again, we’ll know the facts in a few weeks once Isuzu finally launches the 2021 D-Max.

The Land Transportation Office (LTO) has summoned the woman in a viral clip for not wearing a helmet while on board a...
Read more
Spotlight

Provenance: Prolific details about the Lexus RX that will elevate your drive

The RX is the very first luxury crossover SUV to proudly wear the Lexus badge. When it made its global debut in...
Read more
News

Para sa 'Pinas There’s no doubt that the jeepney, aside from being a national symbol of transportation, embodies the richness of...
Read more
News

The term “N95” as used for facemasks first became popular right after the eruption of Taal Volcano last January. This type of facemask...
Read more