Testing the 2021 Kia Stonic: Beyond the portmanteau

Ten years ago, if you mention the word crossover, I’d probably associate it with basketball and Allen Iverson. It’s a different story these days, though. By now, we all know what crossovers are; they would be hard to miss with more than a handful of choices out there on the road.

More importantly, the Philippine market is now populated with affordable crossover options – some even lower than P800,000. The Kia Stonic is one of those new kids in the block with attractive price tags, brought in by Kia Philippines towards the last quarter of 2020.

Kia invited over local automotive journalists, myself included, to test the Stonic in a long drive traversing the winding mountain roads of Batangas. It was done in batches and as safe as possible in line with the current pandemic. It was a fun and enjoyable drive, and here’s the rest of my verdict.

It’s obvious that Kia’s targeting the young set of car buyers with the Stonic’s styling. It looks hip, available in juicy colors, and exudes youth. Up front, the range-topping EX comes with a huge LED DRL in lieu of fog lamps, while the tiger-nose grille interestingly doesn’t allow air through – a design usually found on EVs. At the rear, the slightly aggressive styling is partnered with a set of macho shoulders. The 16-inch two-tone alloys complement the whole sporty appeal. 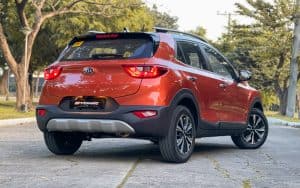 I like the whole look, but probably my favorite design execution here is the black roof that breaks by the C-pillar, and then continues by the hatch. It’s unique and something that I don’t see on other cars. I also love the roof rails that hang toward the rear – similar to what you’ll see on the bigger Seltos. The whole styling is far from tame, and if you’re not a fan, then you’re obviously not in the market for a standout car.

While resting from the 3-hour drive across Cavite and Nasugbu, I asked Kia Philippines President Manny Aligada about his favorite part of the Stonic.

“I love the ergonomics. Coming from a huge SUV, I only needed a short time inside the cabin to get a perfect position,” he answered. 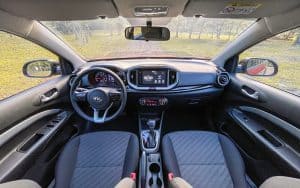 I agree with him. I had the same experience a few days back when the unit was delivered to me. Adjustments were minimal, and I thank Kia for giving the Stonic with seat height adjusters for vertically challenged people like myself.

Though the cabin is understandably riddled with plastics because of the price point, the execution is just fine and forgivable. There are some cost-cutting points you’ll see inside the cabin, like the lack of a center console box and rear amenities. I adore the play on textures, though, and the lot of displays that young car owners would love.

Space, on the other hand, is understandably limited to average-sized individuals, but the headroom on both front and rear cabin are impressive. The rear’s better for two people; three would be a squeeze. Trunk space is enough for overnight bags of four to five people, hidden from plain sight with the standard trunk tonneau.

Safety-wise, you have the standard package of disc brakes on all fours, ABS with EBD, Hill Start Assist, Stability Control, and dual front airbags.

The Stonic uses the same 1.4-liter Dual CVVT engine that the Soluto uses, but with a different tune to suit the crossover’s demand. It makes 99hp and 132Nm of torque, sent to the front wheels via a six-speed automatic.

The Stonic isn’t necessarily underpowered, but the setup is obviously tuned more for frugality. The transmission shifts up as early as possible when left to operate by itself. But if you want a sportier drive, like when tackling mountain passes at speeds, you’d get the needed pull using its manual mode. Admittedly, however, when filled with passengers and cargo, don’t expect the same pull from the small crossover.

Handling, however, is the Stonic’s greatest strength. Just like its bigger brother, the Seltos, it handles like a motorcycle, taking commands without any complaint. Even better, the light steering tightens at speed, which adds stability and confidence. I found myself enjoying every moment I throw the car around corners. It’s that good.

The name Stonic actually comes from the portmanteau of the words speedy and tonic. Yes, I hear you. I won’t blame you if you fall into believing Kia Philippines’ tagline of “Style that’s iconic.” Whichever works for you, I guess. 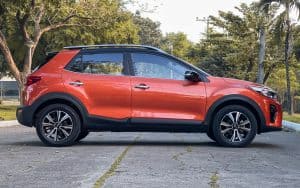 But beyond the words you could associate with this car’s name, the vehicle itself is more than what you see on the outside. It’s a feature-packed machine that you’ll love to drive, and despite some shortcomings, the clincher greatly lies in its pricing.

With a starting price of P735,000 for the LX MT, you’ll pretty much get all the things you’ll love in this top-spec P925,000 EX AT tester, but with a manual transmission. It’s no wonder the Stonic already ranked third in Kia Philippines’ sales figures in 2020 despite just being in the market for three months. The combination of value plus standout look worked well for Filipinos, and I expect this crossover to continue to become a sales driver for the marque.

Previous articleHyundai, Kia not in talks with Apple about car development – report
Next articleThere are 1,000,000 Range Rover Sport in roads worldwide

Nissan’s about to drop its ace in the hole

Nissan’s about to drop its ace in the hole