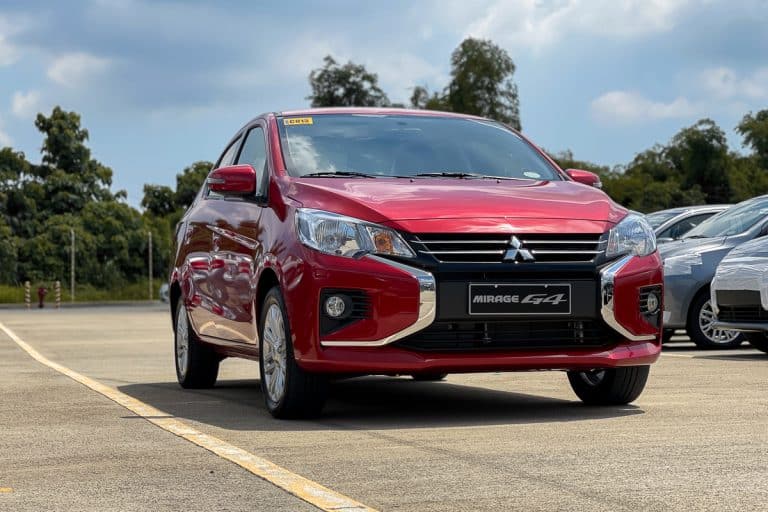 Two years. It took Mitsubishi Motors Philippines Corporation (MMPC) almost two years before it finally brought in the refreshed Mirage G4. Called the Attrage in Thailand, the facelifted model was introduced way back in November 2019. For a mainstream vehicle that stands as a rival to the most popular vehicle in the country, that’s fairly a long time ago.

Delay notwithstanding, the new Mirage G4 finally made it to our shores and is still proudly Philippine-made. The much-needed redesign is a welcome idea, one that many Filipino fans have been waiting for.

I’ve got the chance to sample the refreshed model on its top-spec GLS CVT trim inside MMPC’s plant in Laguna, and here’s my take on the company’s subcompact cash maker.

Much like an older brother who finally caught up with modern fashion, the Mirage G4 is finally wearing the Dynamic Shield design on its fascia. I wish I could use futuristic to describe the styling since it first came out a few years ago with the Montero Sport. Drastic and revolutionary would be the better pair of words, as the aesthetic upgrades are definitely tremendous, especially in comparison to the outgoing model.

The changes aren’t exclusive to the grille; the bumpers, front and back, also got angular visual tweaks, which can also be seen when viewed on profile. The GLS-exclusive fog lamps now have a whisker-like design accent, while the multi-reflector halogen headlamp cluster also gets a new shape. The 15-inch alloys also get a new asterisk design. However, the taillamps and the overall trunk lid shape retain their old form.

All of these are well and good, but its near P900,000 price tag could raise eyebrows, considering that some cheaper competitors within the segment are already equipped with projector halogens. But overall, the host of aesthetic upgrades change the Mirage G4’s appeal, with the angular theme exuding a sporty aura upfront and on its side.

Moreover, MMPC said that you can order the 2022 Mirage G4 with a number of body kits right off the showroom. That’s for a price, definitely, but we weren’t told how much exactly. Also, the Mirage G4 is available in three standard colors: Red Metallic, Cool Silver Metallic, and Titanium Gray Metallic. I like the Titanium Gray the most, though I’m quite curious seeing one in white, which is by the way available for CVT variants and on a per dealer firm order basis only.

As opposed to the massive design changes, the updates inside the cabin are more to keep up with the times. The analog gauge clusters get a clean white-on-black theme, with the dated two-line display showing essential driving info.

It must be said, though – the GLS CVT’s leather-wrapped tiller felt really good to touch, albeit that’s pretty much the only cowhide you’ll find inside the cabin. The push-start ignition button is still on the left side of the steering column, which is kind of a Mitsubishi thing.

And no, you don’t need three or four steps to work your way into starting the engine. It’s as simple as stepping on the brakes and pressing a button.

Everything else is quite familiar within the cabin, such as the rear center armrest with cupholders and the 450L trunk volume – save for the new seat design, additional call buttons on the steering wheel, and the better-looking 7-inch infotainment system.

Speaking of, the touchscreen infotainment system now comes integrated with Apple CarPlay and Android Auto. The great thing about it is that it’s standard across the range, even on the base GLX with a stick shift. Sound is produced via four speakers, just enough for menial listening.

Keyless entry is standard across the range, as are dual front airbags, three-point seatbelts for all passengers, and ISOFIX child seat tethers. However, the following are exclusive to the GLS trim: push-start ignition, immobilizer, remote trunk opener, automatic climate control, and rearview camera.

Interestingly, ABS and EBD are exclusive to the top-spec GLS as well, which is kind of surprising (and disappointing) at this price point and this day and age.

There isn’t one mechanical change applied to the refreshed Mirage G4, and that isn’t necessarily a bad thing. The thoroughly-proven thrifty 1.2-liter three-cylinder MIVEC gasoline mill still puts out 76hp and 100Nm of torque, numbers which are frankly enough to pull this sedan’s 940kg unladen weight.

That said, the Mirage G4’s on-road trait is pretty much the same as before. The light steering combined with its tight turn radius makes do for a very agile machine, though I wish the seats have more bolstering for tackling tight corners. Then again, I’d be remiss not to remember that the Mirage G4 is a city car made for menial tasks; not for autocross or record-busting hill climbs, so the basic seats should do the job.

For context, these numbers are pricier by around P30,000 than the outgoing version, practically the price of admission for the visual upgrades and the mostly reprobated holdup.

But we all know that there were many factors that could have caused the delay – most of them were things discussed behind closed doors. Whether the revolutionary design updates are enough apology for those reasons, that’s entirely up to you.

As for myself, I’d end with a cliché: it’s better late than never, but I won’t be surprised to see a lot of these new Mirage G4 on public roads soon. Mitsubishi has done a commendable job with this one, that’s for sure – a glow-up worthy of your attention.